Posted on December 8, 2014 by Zigmund Kermish

Zigmund Kermish is an associate research scholar at Princeton University.

To ship SPIDER to Antarctica, where it will be attached to a balloon and floated over the icy continent to search for signals from the early Universe, the researchers had to break SPIDER into pieces for shipping. They’ve spent the last few weeks putting SPIDER together again. Here is a recap:

Lots of progress has been made over the past few weeks in getting SPIDER put together. I’ve been a bit too busy to blog much, so here’s a short post with photos and commentary in the captions.

We assemble SPIDER’s two main subsystems, the “gondola” and the “cryostat” in parallel.

The gondola provides the structural support for the instrument, hanging points for the balloon, and pointing control systems that allow us to move the telescope in azimuth and elevation (the angles used to define the apparent position of an object in the sky, relative to a specific observation point).

The cryostat provides the very cold temperature needed and contains the guts of the experiment: six independent telescopes that will image the cosmic microwave background (CMB).

The cryostat takes about a week to cool down from room temperature to the very cold temperature of 4 Kelvin (-452 degrees Fahrenheit), leaving lots of time for the gondola assembly and testing of some subsystems before mating the two and starting to integrate the entire experiment. “The lift,” where we hoist over the 3000 pound cryostat (which is relatively full of liquid at this point!) to the gondola for mounting is a nail-biting milestone. 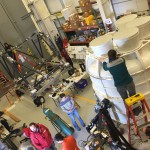 In this photo, the cryostat is in the foreground with Johanna (on the ladder) and Sean (holding the ladder) test fitting the telescope baffles and the gondola in the background (John, Natalie and Ivan putting things together) a few days before the lift. Some of the Princeton crew (PI Bill Jones, grad students Anne and Ed) are strategizing our next moves near the center of the photo. 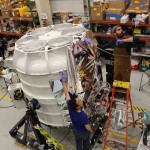 Steve and I added an aluminized mylar cape to the back of the cryostat to provide some needed thermal insulation. Things get pretty cold at float when exposed to space (or pretty hot when exposed to the sun..depending on how things are pointed), so a lot of effort goes into modeling the thermal performance of all the things (thanks Ivan!) to make sure nothing gets too cold or hot during flight. (Photo by Cynthia Chiang) 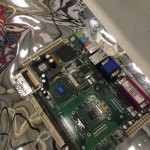 While there was lots of progress, there was also the inevitable setback or two. Often, field campaigns are about things breaking, figuring out why they broke, and fixing them…hopefully making them more robust in the process. This is one of our flight computers that decided to randomly start misbehaving. 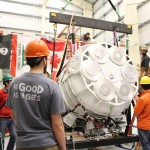 The team preps for the lift. I am the one in the camouflage helmet. We use a spreader bar and stabilizing straps to lift the cryostat in the ideal orientation for clearance when bringing it to the gondola. (Photo by Cynthia Chiang) 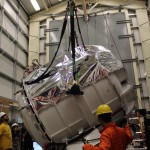 The cryostat goes for a spin as we rotate it to the appropriate orientation just before lifting and translating over to the gondola. (Photo by Cynthia Chiang)

Making the approach! Jamil is one of the only folks in here who’s face you can see. He’s prepared with the wrench in his field pants for bolting down the cryostat when it gets to the correct position. (Photo by Cynthia Chiang) 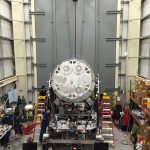 The SPIDER cryostat and gondola together in Antarctica at last. 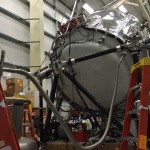 Once we were mounted on the gondola, we started filling the cryostat with lots of liquid Helium (LHe). The first few LHe fills are exciting; the relatively warm (precooled to liquid nitrogen temperatures of 77 degrees above absolute zero) guts of the cryostat cause a lot of the LHe to rapidly boil off, so there’s lots of cold He gas, freezing piping, and other excitement that requires a watchful eye. 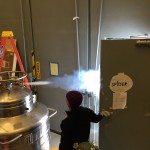 We get LHe dewars delivered to the Ice from Australia. Lots of them came quite over-pressurized from where we like them for transfers, so there was some fun venting out the door (we like to keep the amount of He in the room at a minimum). 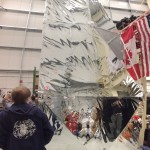 Once we moved the cryostat over, there was room in the highbay to start sunshield assembly. The sunshields provide protection for the cryostat and electronic systems from getting too hot or cold. We also mount GPS receivers and communications hardware on them. They also look impressive in the high bay. 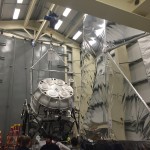 And this is what things look like now. The cryostat mounted to the gondola, the gondola suspended from the ropes and pivot controller on the hoist (this will be the eventual connection point to the balloon flight train) and the sun shields ready and waiting for installation.