Photos from the past

Working on SPIDER for the last 6 years has allowed for some nice photo opportunities. Here, I look back at some of the more memorable photos from the the years past. 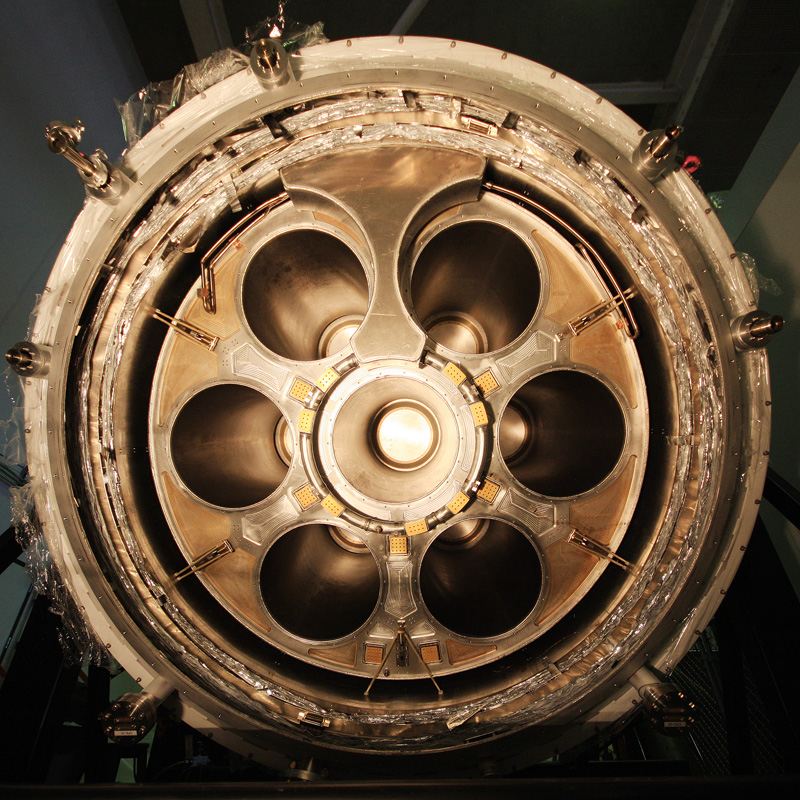 This photo shows the flight cryostat (the part that keeps the six telescopes cold) in its most fragile state, completely naked. A swiss-cheese-like structure with six, one meter long, peripheral inserts designed to house our telescopes. The cryostat was built while the telescopes were still in development phase. It arrived in Princeton early in 2010. The first couple of years, while the telescopes were being built, we were learning how to work with this system, one of the largest cryostats of its kind. 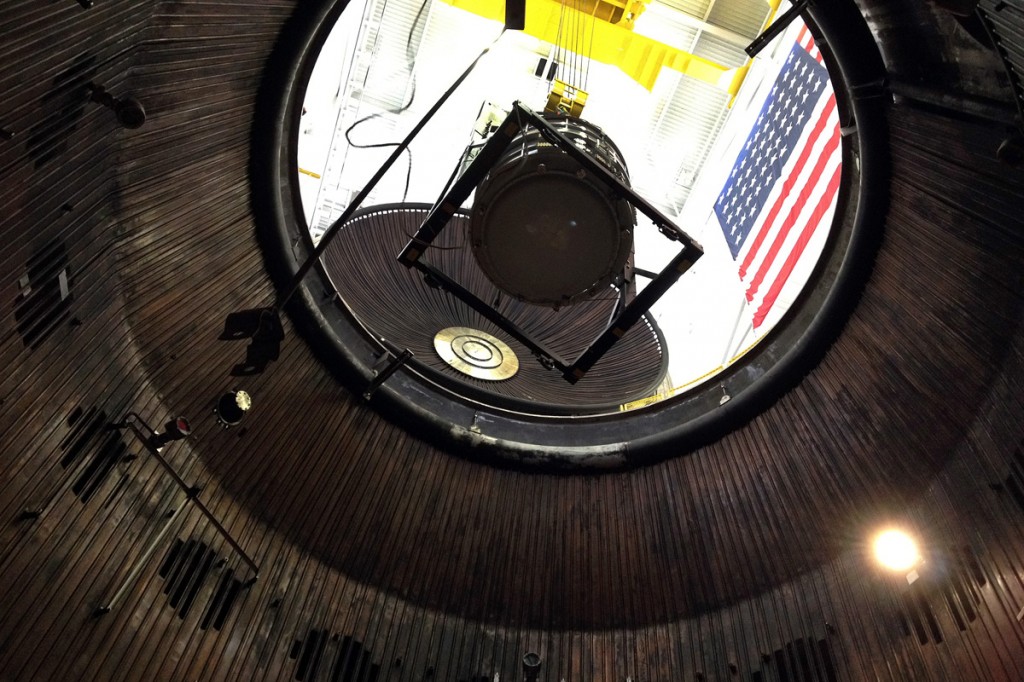 As part of flight qualification, in 2012 we inserted the entire cryostat into a gigantic vacuum chamber operated by the NASA Plum Brook facility. This chamber, normally used to test the performance of rocket engines, made us feel quite small. This image shows the cryostat as it is being lowered down into the chamber, a somewhat nerve wrecking experience. 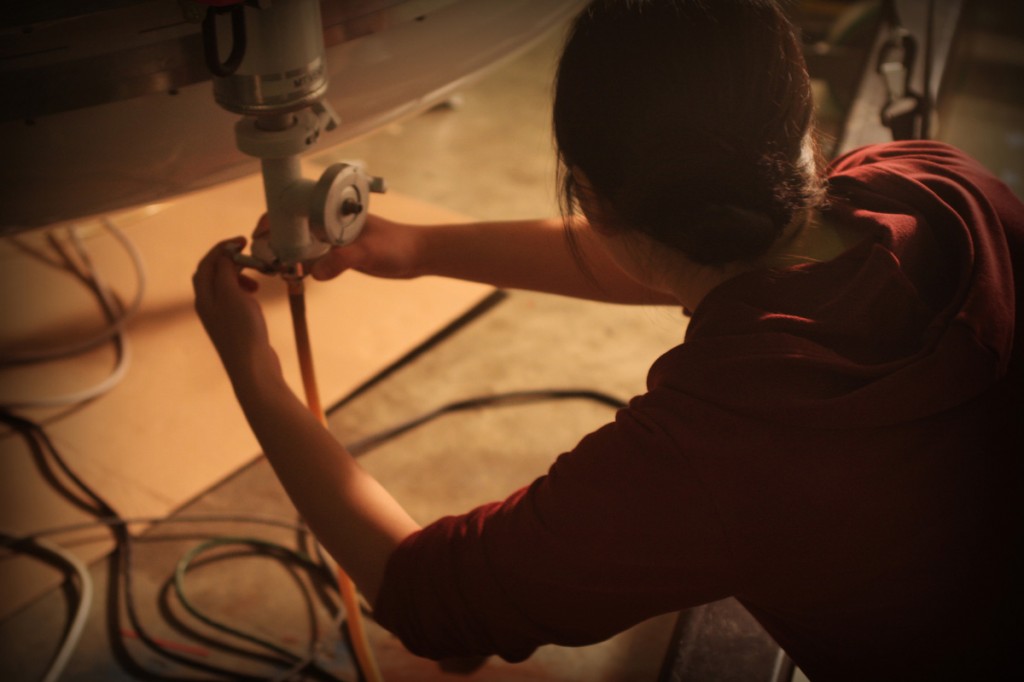 Our working environment has historically been rather poorly lit, especially if you’re hoping for good photo opportunities. There are exceptions, however. This photo shows a former SPIDER postdoc, Cynthia Chiang, performing a routine task: setting up a nitrogen purge on our main cryogenic vessel in preparation for cooldown. The warm tones from our halogen floodlight really sets the mood. 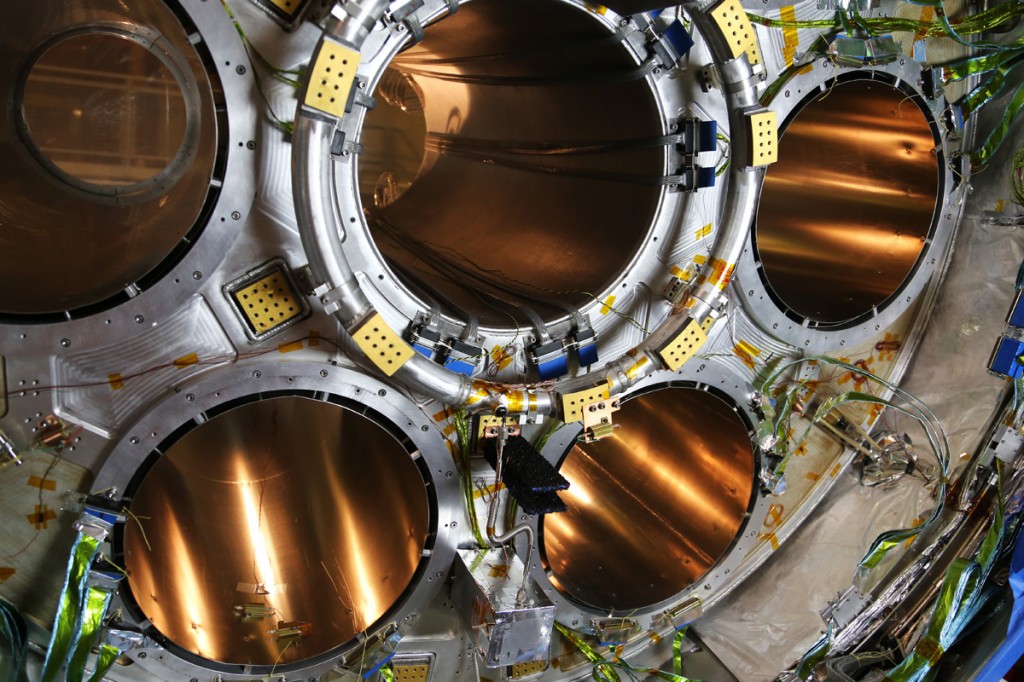 Speaking of warm tones. Again, with the help of our halogen floodlight, we see the strong reflections in the magnetic shields that are located inside each telescope insert. These concentric dual layer structures are designed to siphon any magnetic fields that would otherwise interfere with the sensitive detectors at the heart of our telescopes. 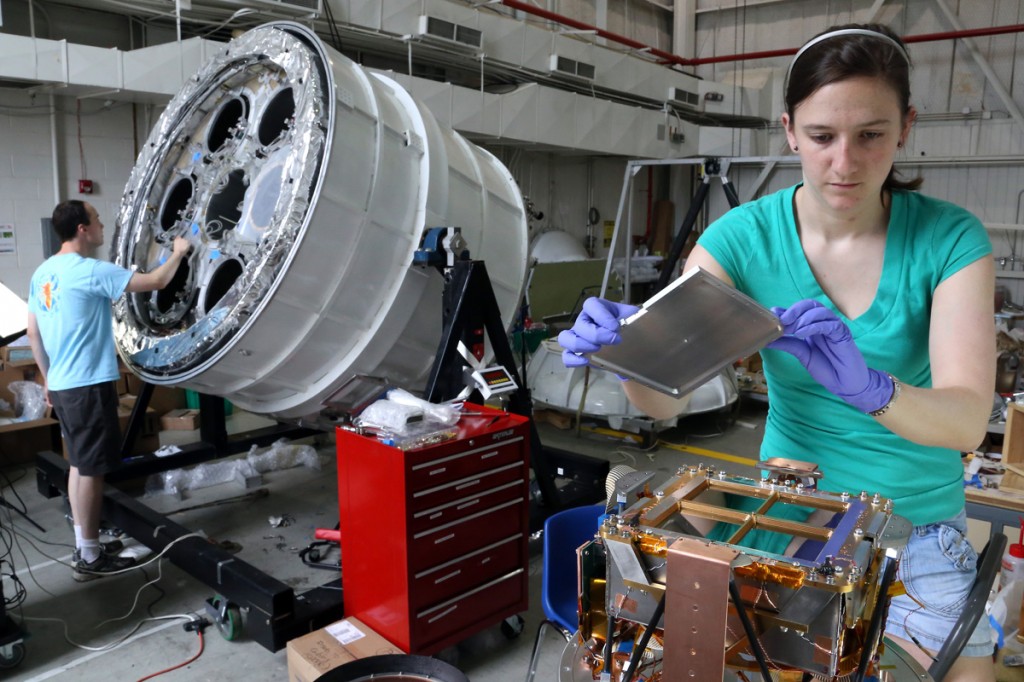 Here we see Anne Gambrel (Princeton) and Sean Bryan (then at CWRU) doing science! Anne, with extreme care, is building a telescope on the bench next to the flight cryostat, while Sean is configuring the SPIDER half-wave plates that we use to modulate the polarization of incoming light. 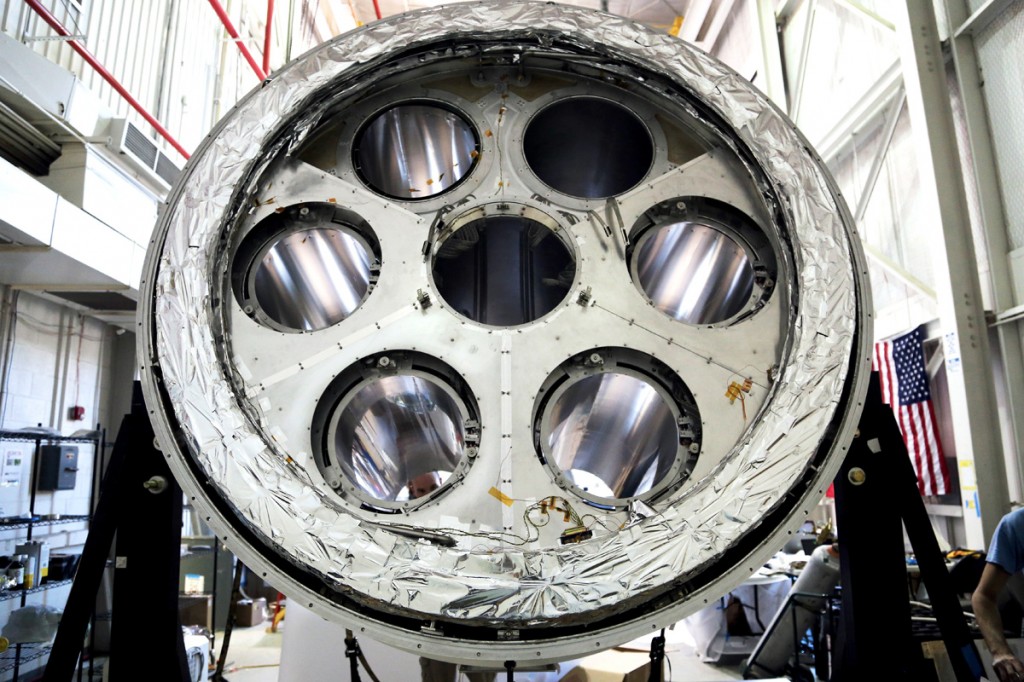 This is the view of the top of the flight cryostat before the telescopes are installed. The half-assembled aluminum shield represents the first wave of resistance against thermal radiation that would otherwise paralyze the cryogenic performance of our system. To clarify: The telescopes need to be cooled to a fraction of degree above absolute zero. To achieve this goal, we use liquid cryogens (helium). That helium will boil off over time, and since we have a limited amount for flight, we need to do a good job at isolating the tank from the outside elements. 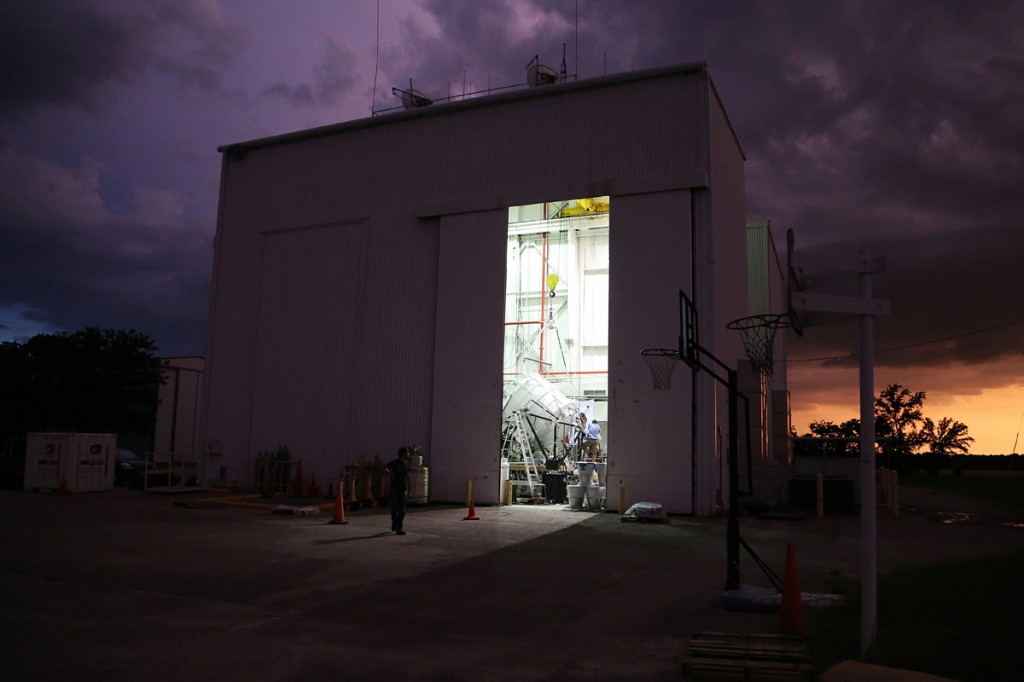 In 2013, we shipped all of our equipment to Palestine, Texas, where CSBF, the NASA facility that oversees long-duration ballooning flights, operates. We spent the entire summer building and testing the instrument in preparation for a 2013 Antarctic flight. The government furlough in 2013 then delayed us by a year. Occasionally, we would had beautiful night skies like the one shown here. Here, Princeton Postdoc Zigmund Kermish is seen looking up at the sky, while the Principal Investigator, Prof. William Jones, attends to the back of the flight cryostat. 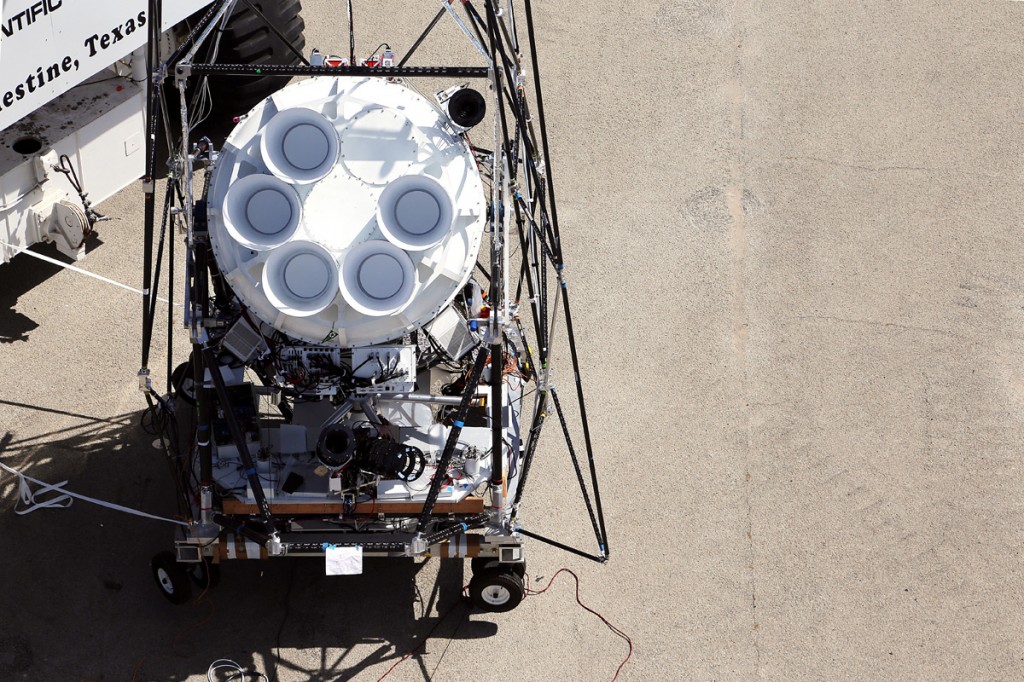 During this testing phase in Palestine, we would occasionally drag the payload out onto the tarmac. From there, we could test our solar panels and calibrate our telescopes using bright objects stationed at moderate distances. This is the view of the payload from the top of our high bay. The negative space makes this photo an ideal candidate for slide #1 on our Power Point presentations. 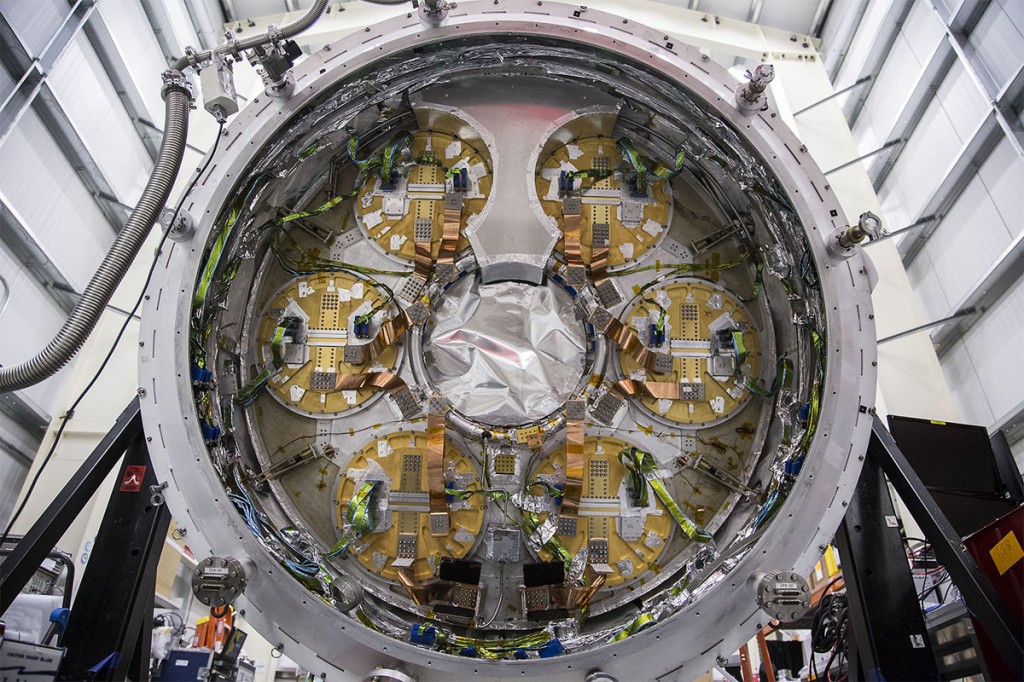 Now, after about six years of development, the SPIDER payload is finally getting ready to deploy from Antarctica. This photo shows the back of our six telescopes after they have been inserted into our cryostat, here at LDB camp in Antarctica. We have now closed up the flight cryostat for the last time. Pretty soon we’ll have a fully integrated payload. I’m sure this season will bring lots of great photo opportunities.

1 Response to Photos from the past