SPIDER is designed to measure the polarization of the cosmic microwave background (CMB), the afterglow of the Big Bang. With SPIDER closed up and cooling toward its operating temperature, it’s a good time for a quick look at the telescopes that make this measurement possible.

SPIDER is designed from the ground up to target the signature of primordial gravitational waves in the CMB’s polarization. These gravitational waves should produce ripples in the sky’s polarization that are incredibly faint: equivalent to variations of the sky’s temperature by less than 100 billionths of a degree (100 nanoKelvin). Though dim, these ripples should also be relatively large: several times of the size of the full moon. This means that it’s perfectly fine to make a fairly blurry map of the sky, as long as our instrument is enormously sensitive and immune to false polarization signals. SPIDER is designed with exactly this in mind, and when it flies it should be the most instantaneously-sensitive CMB polarimeter ever deployed. 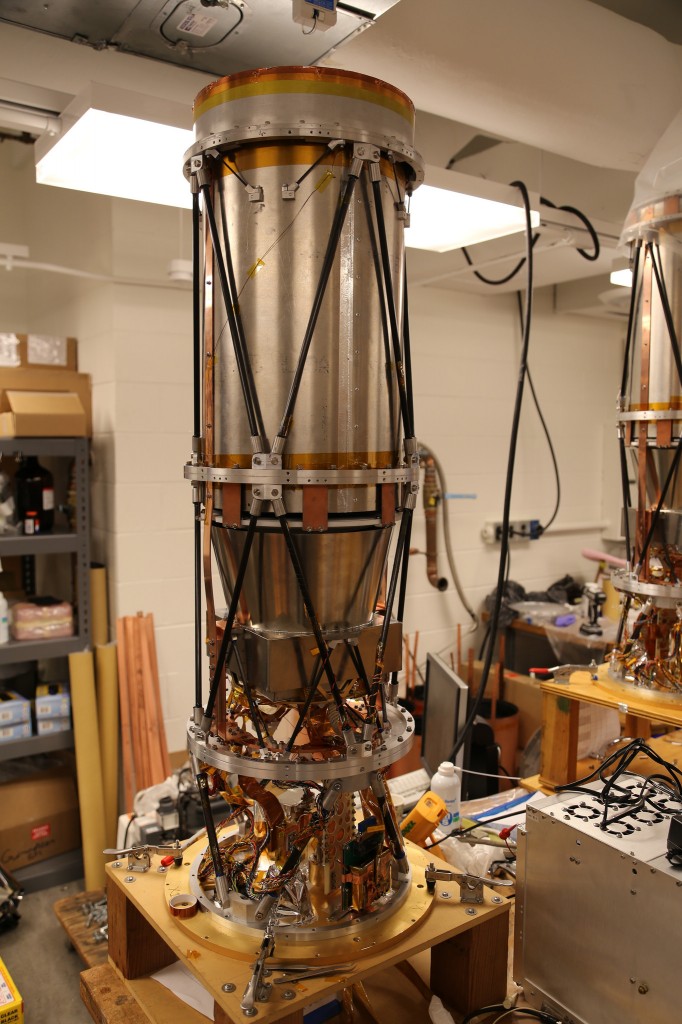 A single SPIDER telescope assembled on the bench

SPIDER’s eyes are six refracting telescopes, each about a foot in diameter and four feet long. These telescopes were designed, built, and tested by the SPIDER receiver team at the California Institute of Technology (Caltech). Each telescope underwent a program of careful electrical and optical testing at Caltech before being integrated with the flight payload. A pair of lenses in each telescope (the objective and the eyepiece) focus light from the sky onto a focal plane populated with superconducting detectors. The lenses are shaped slabs of white polyethylene plastic, opaque to visible light but transparent to microwaves. Each lens is coated with a layer of porous Teflon to reduce reflections within the optical system. This basic telescope design was developed for the BICEP instrument, which observed at the South Pole from 2006-2008, and later for the BICEP2 and Keck Array instruments.

Protecting our sensitive detectors from stray light was a major concern in SPIDER’s design. More stray light means more noise, which means lower instrument sensitivity. This is the main reason why we lift SPIDER on a balloon: to raise it above the bulk of the glow from the earth’s atmosphere, so that the CMB is the dominant light falling on it at the relevant frequencies. The entire telescope is cooled to liquid helium temperatures (4 degrees above absolute zero, or -452 Fahrenheit) in order to reduce the thermal glow from the telescope itself. Most of the surfaces visible to the detectors are even colder to further reduce this internal radiation: 2 degrees above absolute zero, or -454 Fahrenheit. A stack of reflective and absorptive filters protects the delicate detectors from stray light from the outside world, particularly infrared light that might warm them too much. 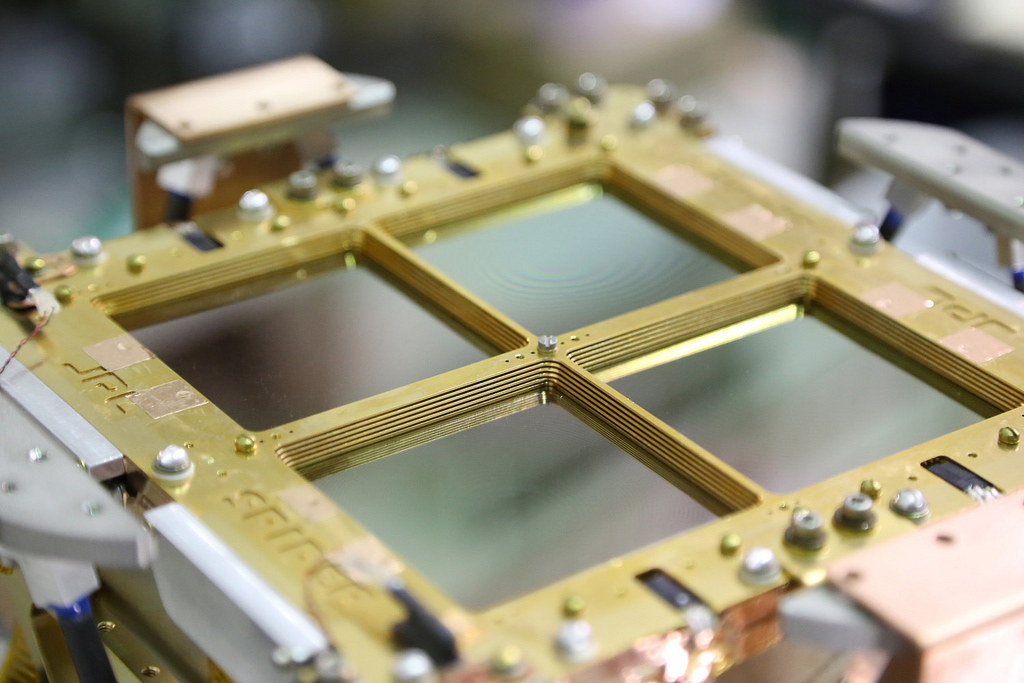 The front (sky) side of a SPIDER focal plane, showing the four silicon tiles

The heart of a SPIDER telescope is its detectors, developed jointly by Caltech and NASA’s Jet Propulsion Laboratory (JPL). These detectors are complete millimeter-wave polarimeters, photolithographically patterned onto standard silicon wafers, with no need for external feed horns or band-defining filters. Power absorbed by an on-chip planar antenna is filtered to select the desired frequencies and then dissipated to heat a tiny suspended island of silicon nitride. Changes in the incident radiation cause the island to rise or fall in temperature, which is detected by a sensitive superconducting thermometer. Each polarimeter pixel consists of two such detectors with interleaved antennas, one for each perpendicular polarization direction. Four silicon tiles full of such pixels populate the focal plane in each telescope. The detectors must be kept extremely cold in order to operate: the entire focal plane is cooled to 0.3 degrees above absolute zero by a helium-3 sorption refrigerator. 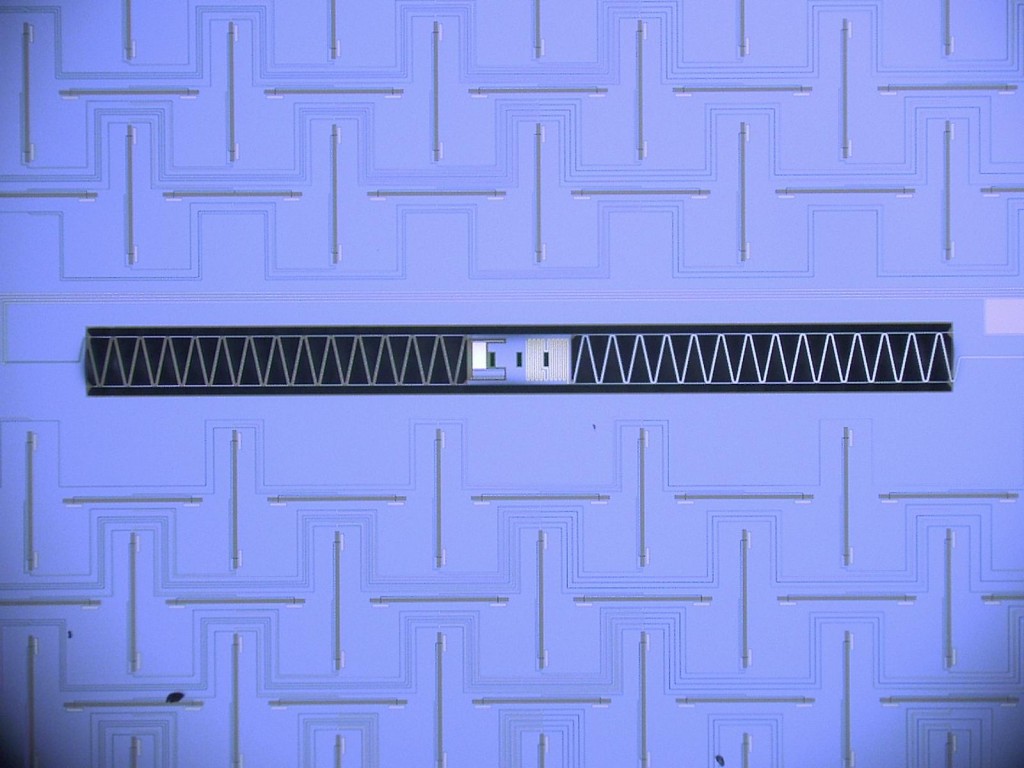 Photograph of a SPIDER detector island. The central island (0.3mm long) is suspended over a pit in the surrounding silicon wafer by thin legs.

Among its six telescopes SPIDER has 2300 sensor channels: 864 sensitive to 100 GHz radiation, 1536 sensitive to 150 GHz radiation. Those detectors are currently dormant, awaiting temperatures low enough to operate. If things go according to plan, we should be cold enough to wake them up next week.