Wait, why am I in Antarctica?

Posted on December 5, 2014 by Zigmund Kermish 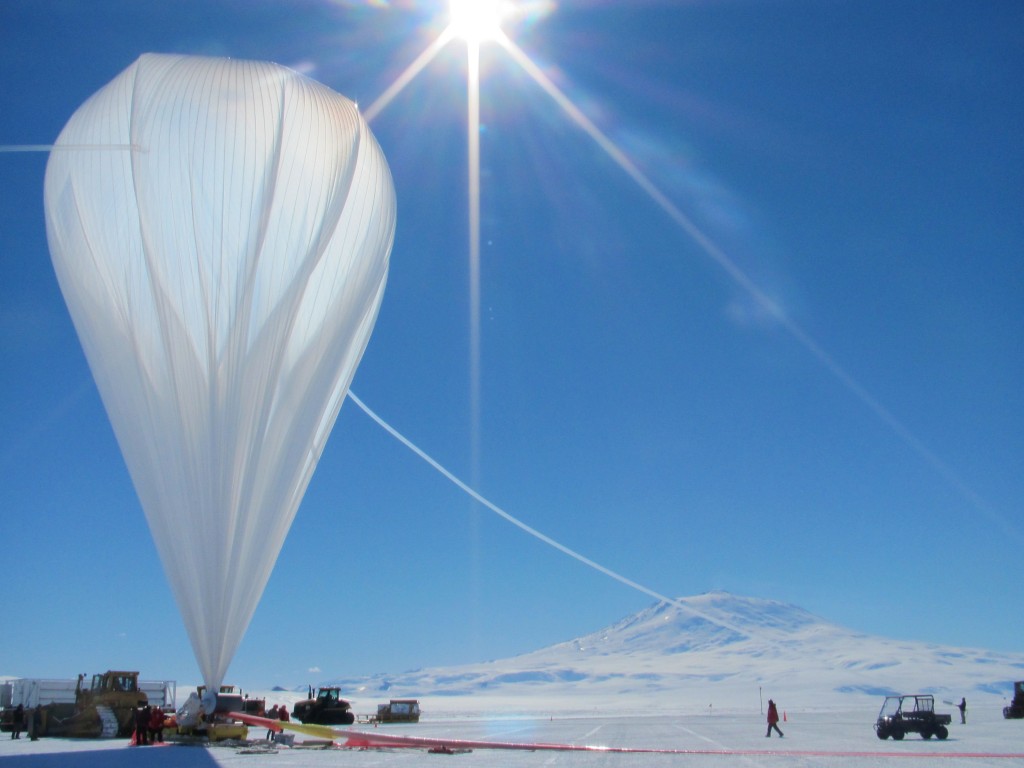 Zigmund Kermish is an associate research scholar at Princeton University. He blogs here.

I realized I’ve not yet written a blog post explaining why my experiment is in Antarctica. Things are temporarily quiet on the Ice while we’ve been waiting for the SPIDER cryostat to cool down, so now’s a good time to make the attempt.

To get the best results from SPIDER, we have to go to very high and dry locations. This is because water vapor in the atmosphere limits SPIDER’s sensitivity. There are currently two terrestrial locations that are commonly used: the Atacama Desert (where POLARBEAR and ACTPol sit at about 5,200 meters above sea level) and the South Pole (where the South Pole Telescope, the KECK array, and this year BICEP3 operate at 2,800 meters).

Of course, one can always go beyond terrestrial limits. With a big enough budget and enough time to develop the project, you can launch a dedicated satellite mission to eliminate the atmosphere all together, achieving dramatically improved individual detector sensitivities. Historically, satellite-based instruments have provided the definitive measurements of various aspects of the cosmic microwave background (the faint signal left over from the Big Bang), but they usually build upon the groundbreaking discoveries made closer to Earth. These discoveries have been made from the ground and from one other platform: balloons.

Balloon-borne instruments have one big advantage: they allow us to get above nearly all of the atmosphere, approaching the detector sensitivity of satellite-based instruments at a fraction of the cost of a satellite mission.

This increased detector sensitivity has two advantages: you can observe a larger fraction of the sky for a significantly shorter amount of time and still get a higher fidelity map than what you can do from the ground (observing for days rather than years) and you can observe in frequency channels that are difficult (if not impossible) to use from the ground. Both of these features, multiple frequencies and larger sky coverage, are necessary to ultimately demonstrate the ‘cosmological nature’ of the signals we’re looking for – to show that it’s not just a signal from some foreground in our local galaxy and that it has the required statistical properties across the sky we expect from proposed theories.

As shown in the below gif, SPIDER can observe a large fraction of the ‘clean’ sky (the white outline) for 20 days and get nearly the same sensitivity over that region as a ground based experiment like the BICEP2 project had on their smaller region (green outline) after several years of observation.

A map of the dust intensity seen in the sky, the bright center band the emission from our own Milky Way galaxy. The overlay that is fading in shows several things: The colored diamonds show the most recent data about the *polarization* strength of the dust signal, blue being less polarized dust, the outlines on the overlay show the regions observed (or to be observed shortly!) by BICEP2 (green), POLARBEAR (red), and SPIDER (white).

Ok, so that’s why we want to dangle our instrument from a balloon. But why Antarctica? Why don’t we just launch our balloon from New Jersey?

Well, for one, at some point, we need to bring the instrument back down to Earth, and that involves literally letting it fall to the ground so that we can recover it. That’s why scientific payload balloon flights only happen in places with low population density. In the US, payloads are flown out of Fort Sumner, New Mexico. They used to fly out of Palestine, Texas as well. Payloads flown out of these locations are limited to flights anywhere from a few hours to a few days because they eventually start getting too close to population centers.

Antarctica doesn’t have any population centers, so rather than being limited by distance, flights are limited by how long the balloons can stay afloat. Currently, that’s about 40 days. Beyond that, weather patterns setup circumpolar winds during the austral summer here.

So if you launch a balloon at the right time, it’ll come back close to where it started, making recovery of the instrument easier (it takes about a week to ‘boomerang’ back around). This is especially important for an experiment like ours since we need to physically recover our data off the drives that fly with the instrument. The bandwidth of in-flight communications limits us to only getting a small fraction of the data from the instrument during flight. One of the many ballooning challenges is to make the system as autonomous as possible so minimal human intervention based on the limited information we decide to ‘downlink’ to the ground is needed.

The other fundamental challenges of ballooning that make this a very different game from ground-based experiments I’ve worked on: weight and power constraints. Having to fly the batteries you need to power the experiment, the solar panels to keep them charged, the cryogenic system to keep the everything cool and all the readout and control electronics systems while still staying below the maximum mass limits current balloons can float makes a project like this a fun problem to solve. The absence of day-night cycles during the austral summer in Antarctica helps address the power and weight constraints by giving us a continual source of solar power. This means we only need to fly a few heavy batteries to provide a non-variable power source and we can dedicate more of our mass budget to the scientific instruments. More compromises have to be made when designing payloads to fly at mid-latitudes, where enough batteries need to fly to power the payload throughout the night. There are many advantages to these mid-latitude flights though: larger available sky and longer (100 day!) flights with NASA’s new, soon-to-launch-with-science-payloads super pressure balloon platform (SPB).