Posted on January 3, 2015 by Zigmund Kermish

The past 48 hours has been a whirlwind, crash-course in the thrilling ride that is scientific ballooning. As I write this, SPIDER has been officially declared ‘at float’ at an altitude of 36 kilometers, our cryogenic system is functioning beautifully, our attitude control and pointing reconstruction systems are being brought online and tuned up, and we’re about to start working with the detectors in the low-loading environment they were designed for. If you had told me we would currently be at this point yesterday morning, there’s a good chance I would have laughed in your face and said something snarky given the experience of other payloads we’ve witnessed this season.

New year’s eve started out with an opportunity for our hang test. As has become abundantly clear in witnessing the many scrubbed launches of other payloads this season, weather is the master of our fates here at the Long Duration Balloon facility (LDB). The weather man from the Columbia Scientific Balloon Facility (CSBF) does his best to understand the weather systems here so that we don’t end up stuck in a snow storm while we’re testing systems on our highbay porch, or having our payload whipped around by the winds while hanging from the Boss (the vehicle that conveys the instruments to the launch site). Needless to say, his job is a bit stressful. When the forecast the day before New Year’s Eve changed from “pretty bad out there” to “low winds, maybe just some fog that’ll burn off in the morning,” we jumped at the opportunity to roll SPIDER out onto the deck, hook up to the Boss and carry out our compatibility hang test.

As mentioned in an earlier post, compatibility is when we hook up to the launch vehicle and drive a bit away from the high bay building so NASA’s CSBF folks can hook up all their systems and test radio communication links while our team goes through a practice launch on our end. The riggers also work out the mechanical details of attaching to our payload and weigh us in to determine the appropriate amount of ballast to fly with. It ends up being a long day, since there are many systems to check, many procedures to carefully go through, and usually, many hiccups that need to be worked through to ensure a smooth launch day. If all goes well, the payload gets deemed ‘launch ready’ and the science team goes back to taking care of whatever last minute changes need to happen and waiting for a launch opportunity. SPIDER’s hang test day was remarkably straightforward. We worked hard in the days before the test to prepare everything and make sure our procedures were outlined in detail, so aside from a vacuum pump starting to freak out in the cold Antarctic weather, everything went as planned and we were launch-ready at the end of the day. 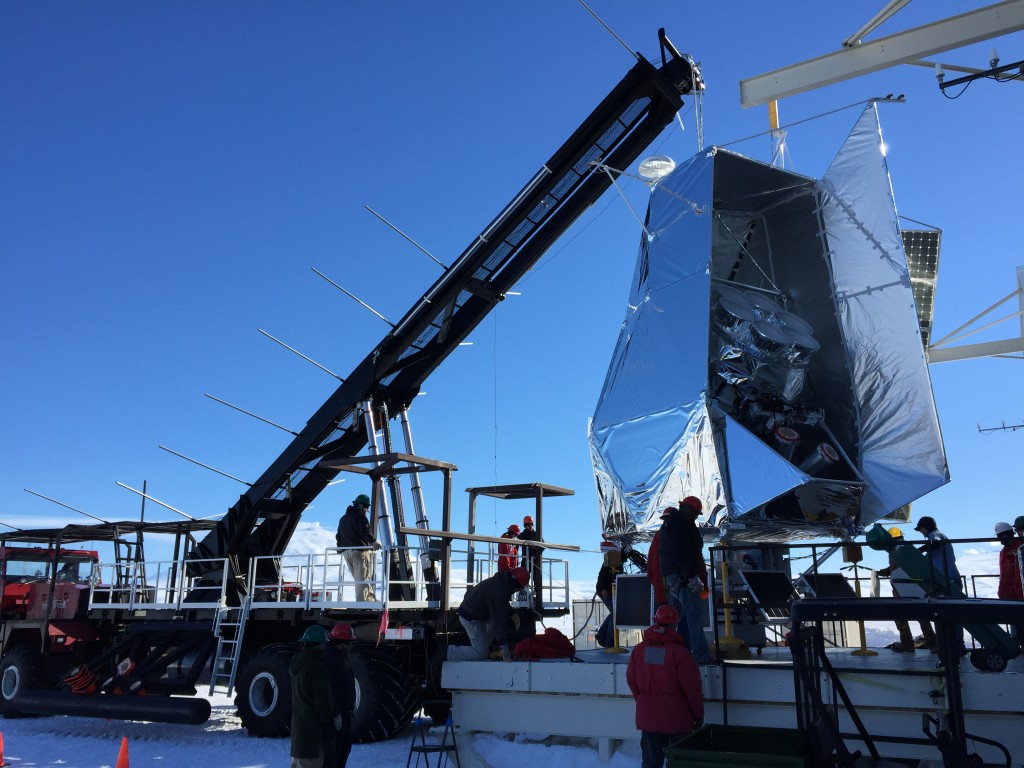 Getting picked up on the highbay porch by the Boss for our hang test.

SPIDER hanging from the Boss, with Mt. Erebus in the background. 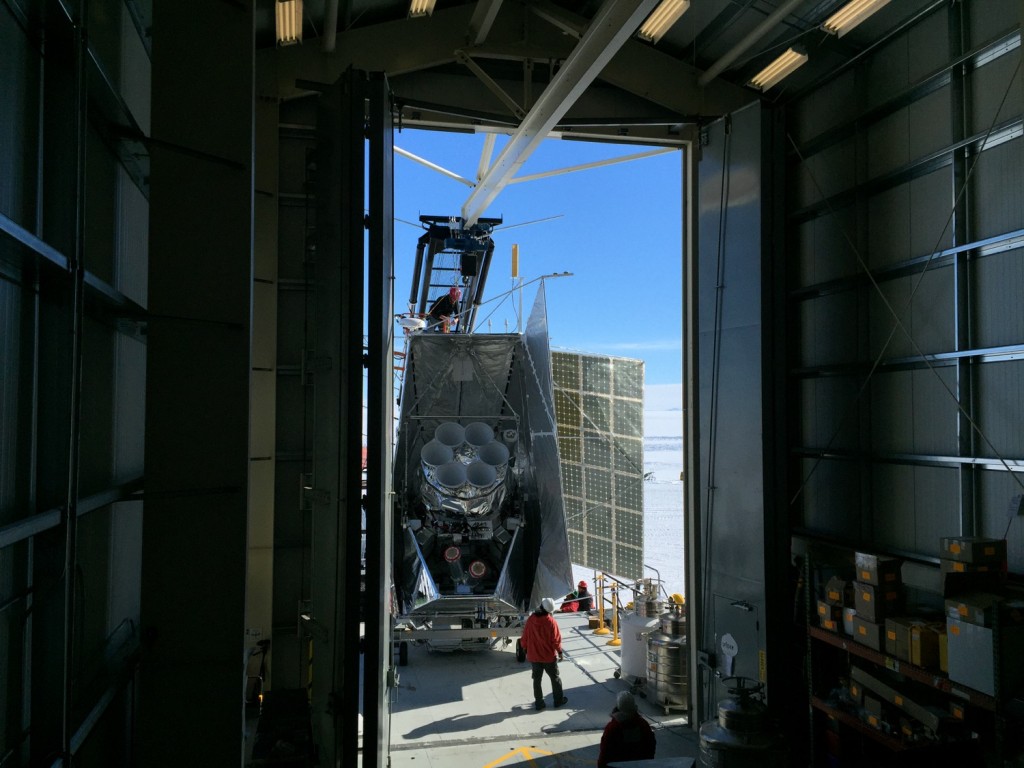 SPIDER returning to the porch, being disconnected from the Boss and reattached to our high bay overhead hoist. You can see one of the riggers up top in a cherry-picker disconnecting our pivot from the hook, while Professor William Jones looks up from below.

Being declared launch ready on New Year’s Eve didn’t necessarily surprise me. It’s been a long campaign, and the team has been working really hard to get to this point. What surprised me is how quickly the forecast for “horrible weather” on New Year’s day turned into “a really good launch opportunity” while we were carrying out our hang test. And what shocked me was that launch opportunity turning into our actual launch and not one of many scrubbed attempts, which we had come to expect after the other two payloads this season had several scrubs each.

Launch day started out with a 3 a.m. shuttle to LDB the morning after our hang test and a marathon evening of liquid helium transfers to fill our cryostat to the brim. I was part of the early morning team to get us out on the high bay porch quickly so CSBF could take over as soon as they arrived. Our well-rehearsed roll out went flawlessly and the Boss was soon chilling on the launch pad with SPIDER ready to go. After finalizing a systems check, out team took some time to relax, enjoy the sunshine and snap some photos of our payload with Erebus in the background while we assumed launch operations would commence shortly. And then…the winds shifted and it started looking like a scrub day. The forecast for the rest of the week wasn’t promising either, so we waited on the pad while CSBF discussed with our team how damaging waiting for a later launch would be to our science, how rough of a launch we thought our payload could safely deal with, and how long our cryogenic system could safely stay out there. The mood in our makeshift control room went from celebratory to anxious, depressed, even manic as we waited for hours. 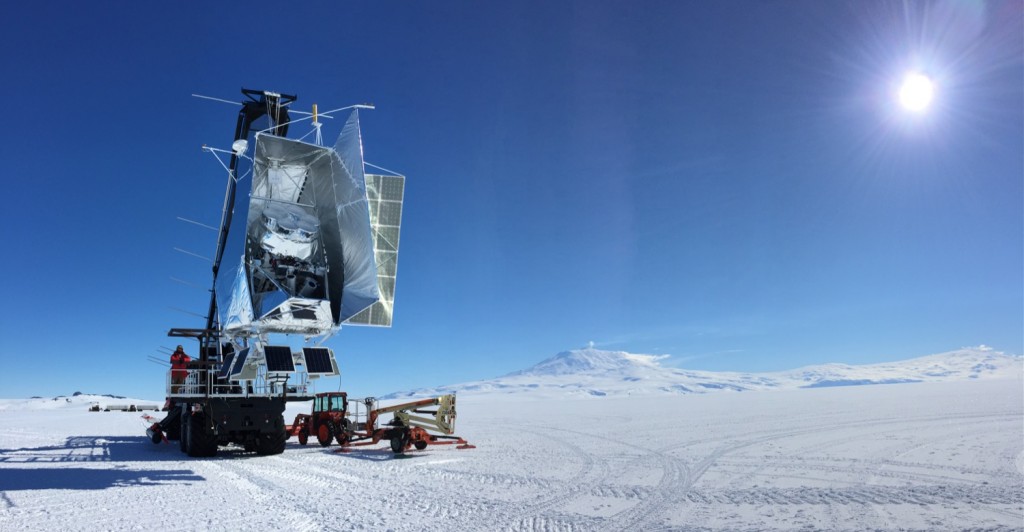 Getting some quiet time on the Boss with SPIDER, a few hours before launch. It was surreal being the only person on the launch pad for a bit while some of our team and all of the CSBF folks grabbed lunch.

Some of the ballooning vets remained even-keeled as the day evolved, but most of our team is new to this. It was difficult to change one’s mindset from the initial excitement and disbelief over unreasonably beautiful weather that couldn’t possibly result in a scrub to the realization that the weather near the surface was completely disconnected from the higher altitude winds blowing 10 knots in the wrong direction that could lead to disaster. That realization was made especially difficult for those of us who had started thinking about being able to head home to families, including children, spouses, and pregnant wives, within a few days.

By the time we had all come to terms with what we thought was the inevitable scrub day and slowly started preparing the highbay for the payload to return…the winds shifted again, and all of a sudden the balloon was taken out of its box and we were go for launch! Once the CSBF team started inflating the balloon, the overwhelming wave of relief, excitement, and pure adrenalin rushed over the entire team. While they can still scrub a launch at that point, once the balloon is out and inflated, there’s a lot more resistance to turn back. At that point, I pulled up a folding chair from the neighboring COSI highbay and sat down with one of their team for a good view of the launch. The science team’s job was done for now, and there was nothing to do but sit back, enjoy the sun and the view, and jump up and down with the unique combination of excitement about the remarkable instrument we were about to launch into the stratosphere and fear it might get destroyed at the instant of launch. 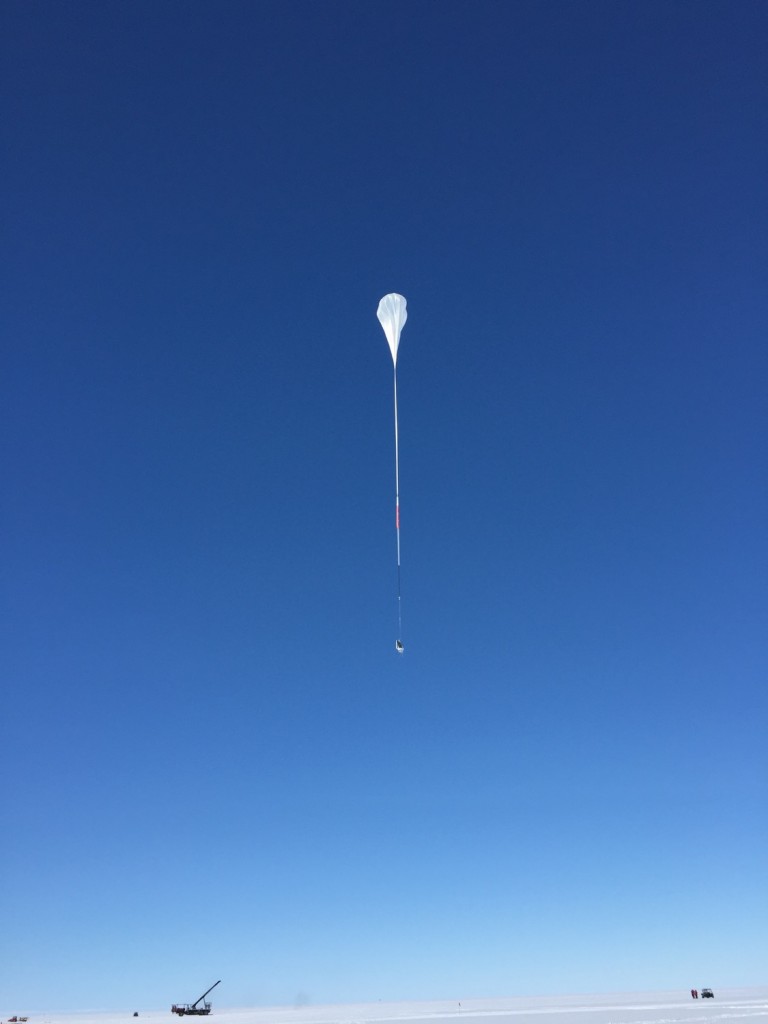 Here’s a video of the launch taken by former Princeton graduate student (now Princeton postdoc) Jon Gudmundsson, who had a unique vantage point since he was part of the small team on the Boss disconnecting some vacuum hardware on our cryostat minutes before launch. 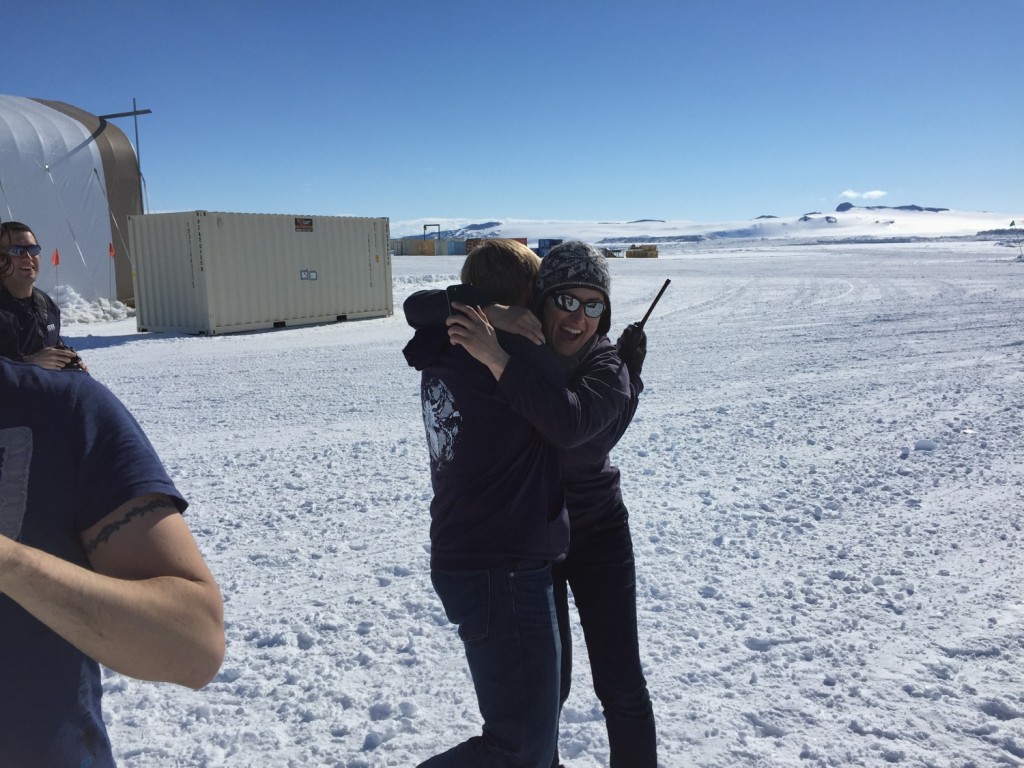 One of the Princeton graduate students, Sasha Rahlin, couldn’t contain her excitement and ran around hugging everyone outside observing the launch.

The launch seemed a bit rougher than what would be ideal, but there wasn’t any visible damage to the payload as it took flight. We all ran back into the highbay to verify all systems were still functioning and that the rough launch hadn’t compromised anything. One by one, subsystems were turned on, tests were performed, and applause broke out when success was declared. At times, it seemed too good to be true; none of us expected the initial systems check to be so successful and work nearly ‘out of the box.’ 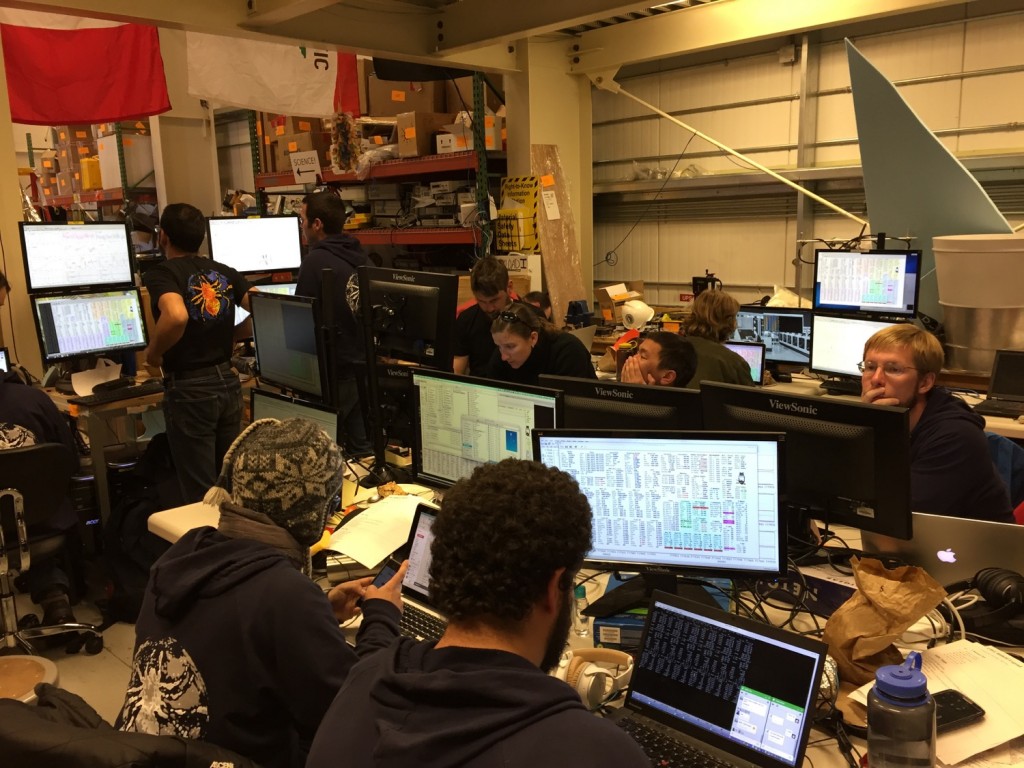 Our command center back inside the highbay with everyone anxiously monitoring the various subsystems (and trying with difficulty to post status updates to Facebook if their subsystem checked out or couldn’t yet be tested!) 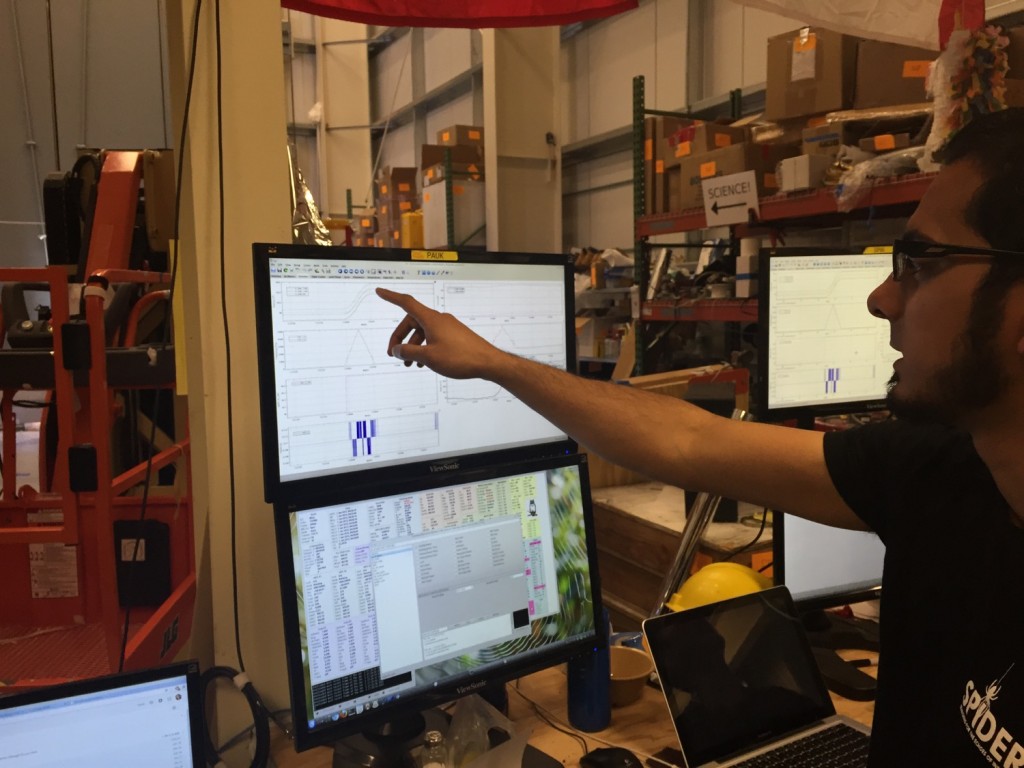 Jamil Shariff, one of the University of Toronto graduate students, pointing out our first move in elevation after launch. This was one of the first of many moments that received a roaring round of applause from all of us in the highbay as each subsystem came online and seemed to be functioning perfectly.

Of course, there is still a lot of work over the next few days for the SPIDER team to ensure a successful flight, and even more work over the next year to understand the remarkable data we hope to collect, but I have faith this team can do it. I’m incredibly proud of everything we’ve accomplished together, and honored to be a part the team. Right now, we’re all an interesting amalgam of exhausted, thrilled, and wired by caffeine, as we watch the balloon disappear from view. I can’t think of a better way to ring in the New Year. Happy New Year! 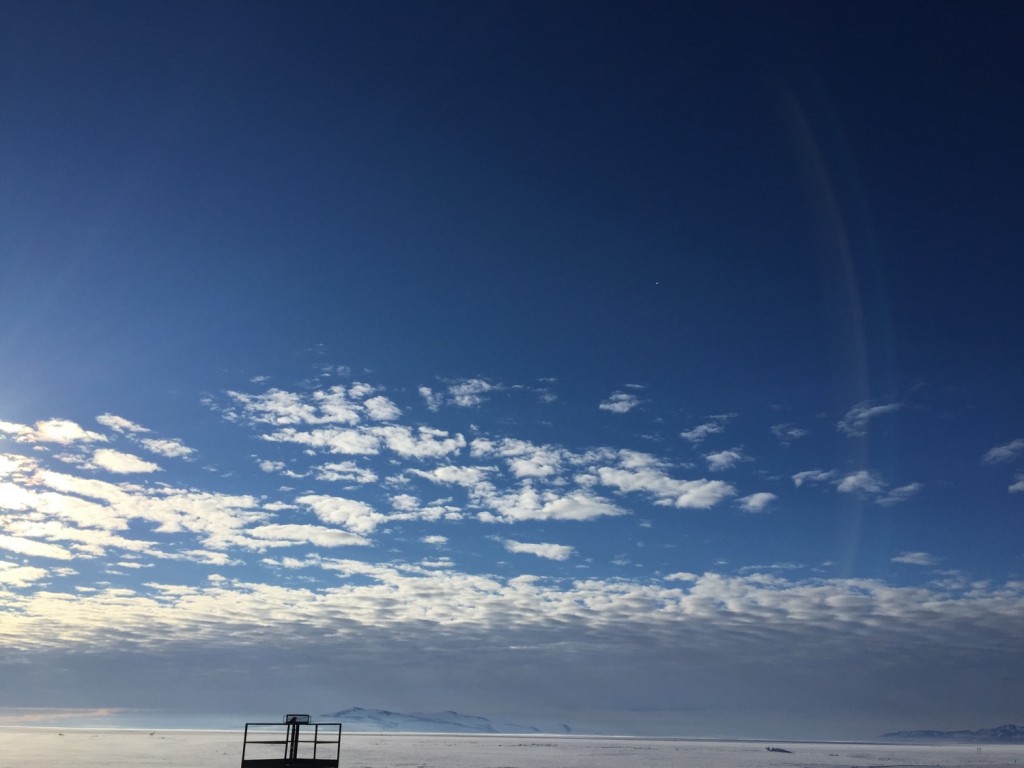 The balloon carrying SPIDER, now a barely visible white teardrop right-of-center in this photo, high above the clouds at 36 km altitude.