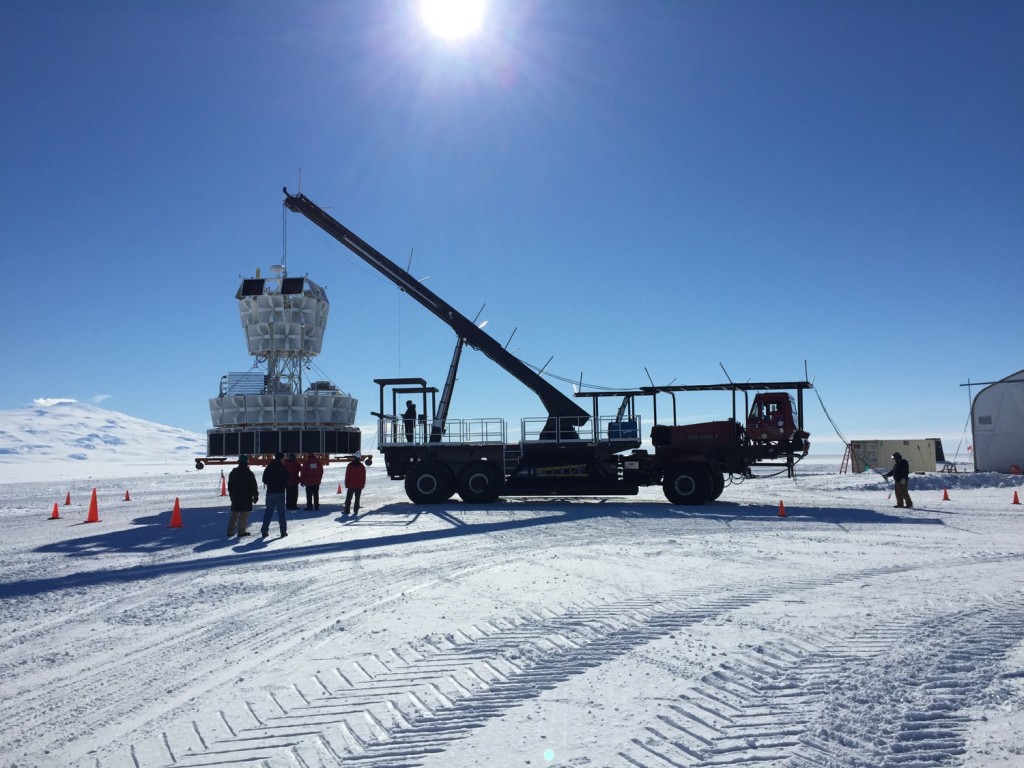 A large vehicle known as “The Boss” will carry SPIDER to the launch pad on launch day. Pictured is another balloon-borne instrument called ANITA, which is on the Boss for its hang test. Mt. Erebus is in the background.

It’s been an exciting week here on the Ice. The other two experiments here with us, ANITA and COSI, have declared themselves ‘flight ready’ and gone through compatibility testing with a hang test on the launch vehicle. That means the science teams are pleased with the functionality of their fully integrated instruments, and NASA’s Columbia Scientific Balloon Facility is happy with how the experiment interacts with their equipment. So now they wait for a launch opportunity.

The circumpolar wind pattern, in which the wind blows clockwise around the South Pole, has set up as of about last week, but flight opportunities only occur when the weather is just right. It’s a bit of a Goldilocks-like situation: there have been four scrubbed launch opportunities over the past week because the winds were slightly too strong, or there was a weather system coming in that was deemed too risky. Moods have been swinging wildly as a possible launch opportunity (often, with an early morning start to the day) turns into a scrubbed launch. Hopefully, ANITA and COSI will launch soon. The longer their flights are delayed, the bigger the risk for us in getting a good launch window.

“The Boss” is the launch vehicle here at the Long Duration Balloon (LDB) facility. The Boss is an impressive piece of machinery that hoists the payload, will drive it to the launch pad on launch day, and then drive around with the payload to follow the balloon’s initial trajectory and help guide the payload for a smooth start. COSI and ANITA both had their hang tests with the Boss over the past few weeks.

The timelapse video shows the very first scans of SPIDER in the highbay here in Antarctica. The video captures the entire system, from the pivot, ropes and spreader bar up at the very top, to the reactional wheel spinning at the bottom. The time-lapse give a false sense of speed to the smooth, slow and steady scanning that occurs in reality. In addition to the back-and-forth motion in azimuth, you can see very small motions in elevation.